How Can We Really Measure Hydroxyls?

This post reviews and unpacks a recent study published in 2016 by the Journal of the Air & Waste Management Association.

Hydroxyl-induced air purification machines are based on the naturally-occurring cleansing reactions of our troposphere. Hydroxyls are created through the photolysis (decomposition due to light) of ozone. This reaction forms excited oxygen atoms, which then react with water vapour to form OH (hydroxyl) radicals.

In natural settings, these hydroxyl radicals go on to oxidize surrounding gases and contaminants. It’s a fast reaction; the chemical lifetime of a hydroxyl ranges from a few tenths of a second to about one second, or even less in highly-polluted regions.

Measuring OH concentrations can be very difficult because of this short reaction time. A recent study has reviewed this oxidation process of hydroxyls inside and out of an Odorox hydroxyl-producing machine. Ultimately, their findings can be used to design appropriate remediation strategies for highly polluted spaces, and they underscore the effectiveness of Odorox’s air purification system.

Published September 2016 in the Journal of the Air & Waste Management Association, the study, entitled “Gas-phase photolytic production of hydroxyl radicals in an ultraviolet purifier for air and surfaces”, was co-authored by David R. Crosley, Connie J. Araps, Melanie Doyle-Eisele and Jacob D. McDonald.

This chemical kinetic study measures and estimates the rate of hydroxyl radical production in an Odorox Boss model. They use these estimates to determine the steady-state concentration of hydroxyls in the stages before, after, and while the machine is turned on.

The Odorox Boss works by filtering air into a chamber, where ambient humidity and UV light at 185 nm results in hydroperoxyls and hydroxyl radicals. The hydroperoxyls react further to generate more hydroxyls. These hydroxyls go on to oxidize ambient contaminants, removing harmful molecules from the air.

These are the reactions that result in hydroxyl radicals (OH) with the Odorox Boss generator. 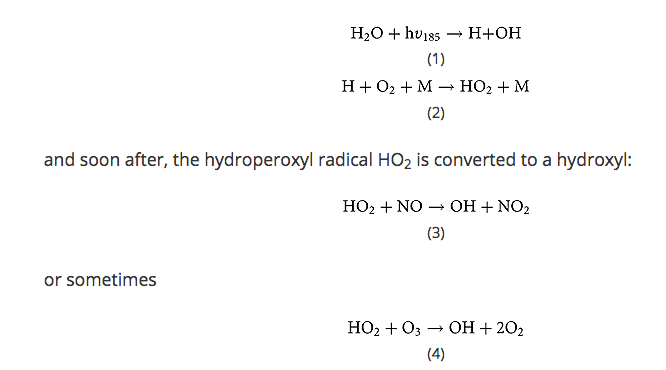 The researchers studied the decay rate of one specific, easily-measurable contaminant, n-heptane, to understand the rate of ambient oxidation by these generated hydroxyls.

N-heptane, or “normal” heptane, is a commonly-used substance in lab experiments as a solvent, and it’s also easily transported and stored.

How decay relates to air purification

The researchers measured the decay rate of n-heptane by sampling air outflow inside and just outside the device during the machine’s two-hour run, as well as before and after.

The lines of linear fit are meant to guide the eye to the differences in decay rate with the machine turned on and off.

The researchers conducted three different runs in different months. They found that higher concentrations of n-heptane maintained a similar decay rate as lower concentrations. This is due to the production rate of hydroxyls remaining the same; it is ultimately what determines decay rate.

They also found that hydroxyl and ozone production in the machine are independent of the intensity of the UV light, but do depend on the temperature and (resulting) ambient humidity. By increasing water vapour, you can increase the rate of hydroxyl production, and subsequently decay rate of contaminants.

Only half of all produced hydroxyls make it to the machine’s exit port. Almost all of the hydroperoxyls that exit the device are converted to hydroxyls just outside of the machine, with a chemical lifetime of about two minutes.

With every “parcel” of n-heptane contaminated air that passed through the machine, about 1.5% of n-heptane was removed. The researchers estimate about 10% removed per hour, if 5.6 parcels pass through.

This is an effective rate of removal, but it begs the question: how does this contribute to the well-recorded observation that hydroxyl-producing machines are able to clean spaces with microorganisms that are far away from the machine? And how is it able to clean mold, or remove contaminants that do not pass through air flow?

What it means for air purification

The researchers posit that this is possible through reactions with the partially oxidised products of the initial OH + hydrocarbon reaction.

“For compounds with only a few carbon atoms, the degradation processes from initial hydrocarbon to H2O and CO2 are extremely complex and involve dozens to hundreds of intermediates. Some of these are radicals. One hydrocarbon radical is produced each time a hydroxyl molecule abstracts a hydrogen to form water.”

This means that a hydrocarbon radical will repeatedly react with oxygen, which go on to create hydroperoxyls and hydroxyls. This “cascade effect” means that reactive compounds will survive long enough to travel around a room. They can then reach surface-bound chemicals, microorganisms, and mold.

Accurately measuring and estimating the Odorox Boss’s hydroxyl output will have a significant impact on future studies of the machine and on air purifiers in general. Since this reaction also happens naturally, it has ramifications outside of internal air purification and decontamination.

We’re excited to continue seeing and verifying the scientific success of our machines. If you have any questions, feel free to contact us here.